“The only thing more stupid than guineas are people who try to raise them!,” muttered my husband, Mike. We were tromping through a wooded shelter belt, dodging scratchy branches and wading through long-fallen leaves searching for our scattered flock of guinea fowl. It appeared that eight weeks of pampering and nurturing was leaving and had no intention of coming back! Fortunately an agile neighbor girl helped us to corral the birds and herd them back to an enclosed pen. 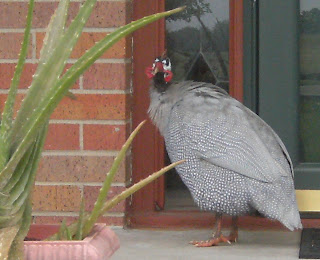 Guinea fowl are interesting birds. Originally from Africa, they have been domesticated, but have not totally lost their wildness.
And what a face! It is a contrast of red, white and black. The head is clown-face white, with black eyes (rimmed with black as well on the Pearl guineas) and a red triangle-shaped helmet on the very top of the head and wattles on each side of the beak, half circles for the females and bowl-shaped on the males. And all this held up on the very skinniest of necks, perhaps less than an inch in diameter with a few wispy hairs on the otherwise naked skin.  Plump feathered bodies are  held up with thin stalks of legs. Yikes! The feathers may be white, or in the case of the Pearl guineas, gray with white dots. There are others kinds, too, in various shades of black, purple or blue. We had heard mostly good things about guinea fowl: that they eat an astounding number insects including  ticks and mosquitoes,  that beautiful insect-free flowers and vegetables gardens were just a guinea away, and that they do not  scratch out plants or seedlings in the exuberant search of bugs as a chicken would. They were simply the best natural insecticide! The only downside was their loud, raucous cry.  It seemed worth a try and so we bought six keets (baby guinea fowl are called keets). They were alert and active from the beginning and if we were to drop a bug into the heated box where they stayed all sorts of excitement broke out.  However, they had grown up, moved outside and things were not going according to plans. Our guineas were not doing their job.

We had been advised to keep our guineas penned up with a view of their territory so they could establish where they are suppose to live and work. After a week of two in the pen, we let two male guineas out. Did they begin their mission? No, they did not. Instead of going on bug patrol they paced along the outside of the pen while their counterparts on the inside paced on their side of the fence. Letting all of the guineas out at once resulted in the scattering of guineas and frantic chasing by humans. What was the answer? 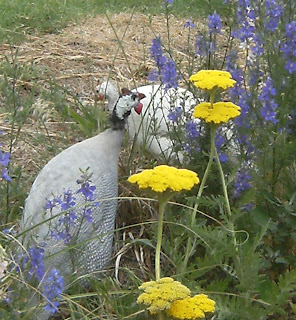 The answer turned out to be love (of the male and female kind). When we allowed a pair to roam, they stuck together and stuck close to home. True, there was no good way to explain boundaries or property lines so they roamed neighbors’ yards as well as ours. Fortunately our neighbors are understanding. We sold three guineas, keeping two pearl males and a white female. The female had already selected her mate and the remaining male did not stick around. I saw him head out through the neighbor’s yard and he never returned.

Our couple needed names. I chose Hank and Edna after a dear couple who were mainstays in the church we attend. Hank was a deacon, Edna a Sunday School teacher and I grew up with their sons. They passed away within a  short time of each other several years ago. When I watch the delicate Edna followed by the always attentive Hank, the names just seem right. (Hopefully family and friends agree--no disrespect was intended!)  I understand that guineas mate for life and surely this pair seems devoted to each other. They are never far apart (unless Edna is sitting on a nest which is another story for another time).


Possibly the least action-packed video on the internet today! Hank and Edna on the job.

It is one of life’s sweet pleasures to pause at a window and see the pair as they patrol the yard,  heads bobbing in search of insects. They seem to communicate with gentle clucking sounds, but should they be startled in any way, the screeching begins. Females have a two syllable call, while the male’s call is just one syllable. Usually it doesn’t last long and they are back to their “job”. Sometimes I'll hear a gentle tap on the front door. It's Hank and Edna stopping by the front door to peck at their images in the glass door and preen for a while. They spend enough time there that the welcome mat is not always very welcoming! They enjoy a dust bath from time to time and will find a patch of dirt where they lie down and wriggle in the dirt. You might think this would be a way to get dirty, but they seem to think they are getting clean! 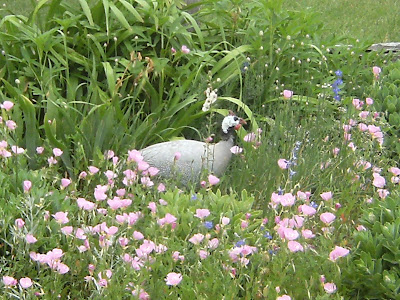 The gardens are beautiful this year! Of course the guineas don't get all the credit, but so far there are no grasshoppers in the flowers or beetles on the roses. And I have seen only one tick this year.  Now I must admit that they are not totally benign in the vegetable garden because they do have a taste for lettuce, peas and beans and help themselves leaving jagged leaves. Hopefully they will make up for their indiscretion when they eat squash bugs latter this summer. 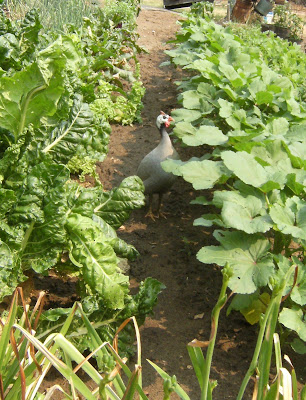 In the evening they are given a little bit of grain near the chicken pen. They come running when they are called. It is impossible to watch a guinea run without smiling. Running big round bodies with stiff, skinny legs are universally amusing. They are not very friendly to the chickens. Although they sometimes act like they’d like to enter the chicken pen, I’ve watched Edna perversely chase a frazzled hen and seen Hank peck right through the fence at a too-close chicken. Better to keep them separate. At night they fly high up into the cedar tree that towers above the chicken pen. They roost side by side on a branch. I am an early riser most summer mornings, but they are usually way ahead of me, back on the job plodding through our yard, or perhaps a neighbor’s, hunting for bugs. Just another day for the Super Guineas!


Want to read more about Hank and Edna? Click here.
Or here. Or here.