Our Family Game is Scrabble!

It’s Sunday afternoon at the Epp home. The morning church service is over and the evening service won’t begin until 7 p.m. Dinner (likely pot roast with potatoes and carrots eaten at noon) and dishes are done. Yes, naps may also be on the agenda for the adults, but first let’s get out the Scrabble game! Not everyone wants to play, but we have extra racks in our game so that the game is not limited to just four players. Grandma Schroeder always wants to play and so does Mom. Dad might if there aren’t any pressing chores. My brothers are good for a game and my sister usually plays as well. The in-laws have not all received the Scrabble gene so they may or may not play. In the box is a list of two-letter words and there are a couple of dictionaries stacked on top.
Long ago the question of using the dictionary has been decided. “It’s supposed to be an educational game,” says Mom so dictionary use is okay. Sometimes this has to be repeated. Someone finds a piece of scratch paper to keep score. If Dad is playing that’s his job. I am sometimes playing too, but it is not something I am particularly good at. The long waits between turns, the pressure to hurry when it was my turn (Think, THINK!) and the inability to “see” words in a jumble of letters ensured that my score was seldom near the top.

Most people are familiar with the Scrabble game. After all, one out of three homes have the game. http://www.scrabble-assoc.com/info/history.html  It’s basically a crossword puzzle game where each player contributes words  from the seven letters on their rack. Words must connect to each other and have point values. In addition where you play the tiles on the board also contributes to the score as some squares are labeled double word, double letter or triple word or  triple letter.  If you manage to use all seven of your letters, its a bingo and worth 50 extra points. Not that I ever had much experience with that!

Most games are essentially a combination of skill and chance. Things we can control and others that we can’t. Scrabble leans heavily on word knowledge and skill in placement, but when you draw your letters, you never know what you might get. We have limited knowledge and there is always an element of the secret or unknown. What letters will you draw? Who has the q or the z?  Games come with rules that everyone must follow. There are limits in the number of tiles and the size of the board. It’s not too hard to draw some similarities between games and living life for certainly there are elements of skill and chance in our lives every day. We put forth effort but there are things out of our control. Sometimes life hands us a rack of one point vowels instead of a ten point z and its always about doing the best with what you’ve got.

Grandma Schroeder was not someone who you would expect to be a Scrabble champ. Quiet and unassuming, she was the daughter of Mennonite immigrants. Low German was spoken in her home while growing up and her education which did not exceed grade school was also in German. Yet she was quite an adept player although spelling was a bit of an issue sometimes. Her secret was her many hours of solitary practice. She had become a widow before she was 70 and she found the long evenings especially lonely. That’s when she got out the Scrabble board and played by herself. When you practice you get better.

Oh, the games that were played! Especially between my mother and her sons. Though both moved from the area after college, a visit always meant getting out the Scrabble board. These were competitive, well-played matches and anyone might win. After a well-fought battle with cancer and four years of chemotherapy, when Mom was moved to the hospice wing, the Scrabble game went with her. She played a few games there and even managed to eek out a win against her youngest son. Shortly after that Dad took the game home. It was getting close to the end, she was weak and it was hard for her to think clearly sometimes. “If she can’t do it well....,” he said. 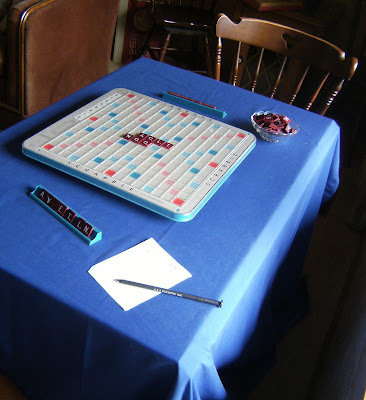 Somehow it never became the game of choice when my sons were growing up. However at some point I discovered a few ways that we could enjoy the game. Once I set up a game on a table in the living room. I began the game and sure enough, my college son joined in. The game and a scorecard sat out and we played, not together, but whenever it was convenient. For instance I would play and record my score in the morning before leaving for work. He might pop in sometime in the afternoon after class and before working out. He could play then and record his score while I might play again in the evening. Of course this method leaves the door wide open for cheating should you be so inclined. But, why should you? It’s a learning experience! This method gave me time to THINK and my house rules also include use of the dictionary.

I’ve also set it up during a Sunday afternoon football or basketball game on TV. The game is set up on a small table in the middle of the room and you can watch the game and take your turn in a rather relaxed manner. Since most ball games don’t demand your full attention all the time, but the other players are not just waiting for you to complete your turn, I think it works out rather well. Yes, I am aware that my sons play mostly out of a kindness to me, but I’ll take it!

Scrabble on Facebook has opened up a whole new adventure into the game. Now I don’t have to wait for a visit from my brothers to play Scrabble with them. I can and do play with them every day. It’s a little like the method of leaving the game sitting out on the table. Someone plays and when it is convenient the next person plays. I love, love, love playing the game this way!!! It’s a great way to keep in the daily lives of family and friends. And I've gotten better!