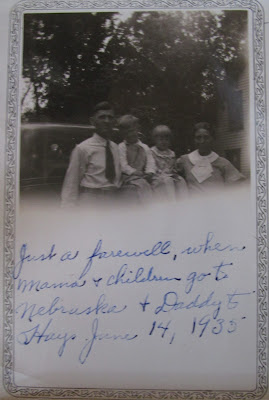 Can we all agree that being a mother of young children is exhausting? Especially if the dad has to be away for an extended period of time? That the saying "The days are long but the years are short" is a truth that stands the test of time? I present for evidence a letter written by my grandmother to my grandfather dated July 22, 1935. The children is question were my father (Harold) and my aunt (Maryann) who as long I have known them have been nothing but dignified and upright but were nevertheless quite a handful as they approached their fifth and third birthdays.  And, of course, in 1935 their parents weren't Grandma and Grandpa but Esther and Abe, a young married couple.
Read more »
Posted by Bev Sullivan at 8:03 AM No comments: