The Big Tree: A Memoir 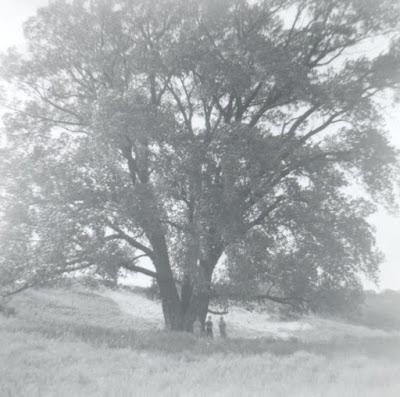 On the once treeless prairie of Kansas, a giant cottonwood tree grew in a remote cow pasture. My grandfather, A.R. Epp, loved the rugged beauty of the rolling sand hills and so he considered it an honor to have such a tree on his land.

Most likely when he moved his family to the farm near Buhler sometime in the 1930's, it was little more than a sapling. Who would have guessed that it would grow so big? It wasn't near a river or lake, but over the hill, not too far away was a small pond and there must have been a deep aquifer underground to supply water for the tree. As its roots drank deeply, its massive trunks (there were three of them compressed together) stretched and expanded, up and up, out and out. At its tips slender branches reached skyward with silvery leaves shimmering in the sunlight and lilting whisperings in the wind.

On most summer holidays when our family got together during the 1960's and 70's, we would gather for picnics in its warm, welcoming shade.

We began the tradition when my paternal grandparents still lived on the farm and continued it after they moved to town and our family moved to the farm. There were four children in our family and our aunt and uncle had four children whose ages were almost identical to ours. Our mother had a brother who lived in Elbing and that family had five children. The lines between relatives came down (technically the children in the two families were cousins to us but not to each other) and everybody had fun.

It was not only its size that beckoned us to its presence.  It was situated near a hill whose eastern slope had been swept of all vegetation.  The sandhills are truly made of sand, finely grained and a light coppery color. This hillside was a giant sandbox!  Shade and sand created an irresistible combination--perfect for family picnics. Well, maybe not perfect, some might object to sand in the food, the lack of running water and round, ploppy remnants that reminded us that the shade of our beloved tree was also enjoyed by all the white-faced red Hereford cattle that inhabited the pasture. But we liked it because it was ours. As I recall we just loaded up people and food on a hay wagon and it was pulled by either a tractor or pickup to our special spot. The hay wagon would then become our serving table. Frankly, I can't remember much about the food we ate, although I'm sure my mother's potato salad was on the menu. She made it for every single summer gathering and everyone would have been disappointed if it wasn't there. I can see her still, with a smooth, peeled, boiled potato or egg in her ample hand rhythmically slicing first one way and then the other and then finally cutting across the slices to make little ivory cubes. I can see her reaching into a canning jar, pulling out a wad of watery dill and then grasping one of her tightly-packed, crisp pickles to put in the potato salad. It was not a secret recipe but I have never been able to quite duplicate it. 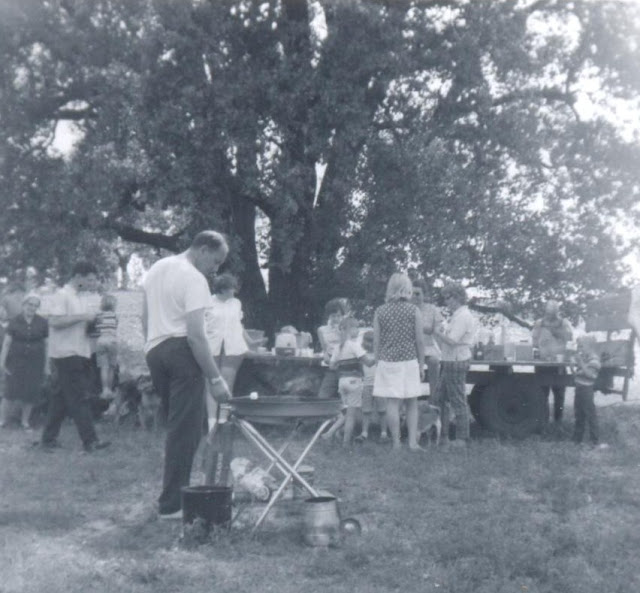 Children come to picnics to play, not really to eat. Our sandhill was just right for building castles or burying a younger brother up to his neck. You could build tunnels and as you dug deeper the sand was damp and cool. The sand could also serve as a long-jump pit. We would line up on the back of the hill and then take a running leap over the crest and down into the sand below.

The tree was good for climbing although you couldn't get very high. The trunks separated in three directions about four feet off the ground and created a cove with enough room for several children to whisper secrets or play house. One branch dipped down within a few yards of the ground. Its diameter was just about right to straddle and bounce, somewhat like riding a horse.

The tree's size was the perennial topic of conversation. It truly was astounding. “I’ve never seen a tree so big,” an uncle might remark. “Why, it would take five or six of you kids reaching out to go all the way around it.” 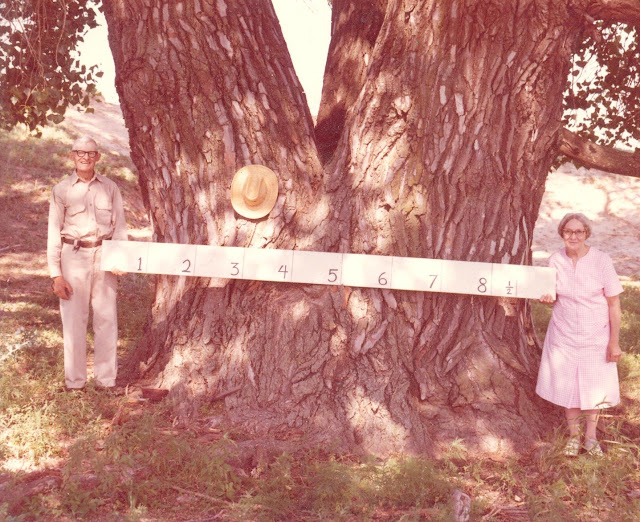 Yes, we all agreed it had to be the largest tree in the county. This was confirmed by a contest sponsored by The Hutchinson News sometime in 1978. With a circumference of 19 feet, 1 1/2 inches, our tree was deemed the winner, beating out a tree in Alden by six inches. Grandpa enjoyed his 15 minutes of fame when his photograph and an article appeared in the June 9 issue. In the photograph Grandpa looks minuscule next to the tree. The article doesn't list its height, but by measuring and doing a little comparison math, it appears that the tree was approaching 120 feet high with a spread that was even larger. In the article he fretted a bit that publicity would attract tourists who would frighten the cattle and because Grandpa delighted in turning every conversation into something spiritual he was quoted as saying, "I give all the glory and honor to Jesus." 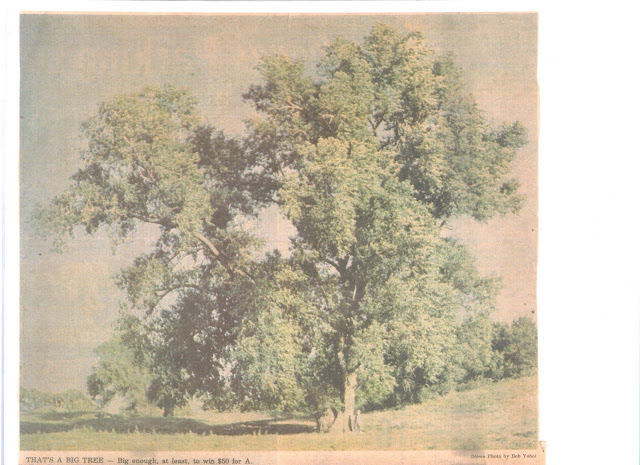 Today there is no Big Tree. A lightning strike followed several years latter by a windstorm, toppled one third of the tree. Within a few years the other two trunks fell as well. Time has taken its toll. When we go near our former picnic spot there is no evidence of its former glory. The sandhill is now growing with vegetation. A stray piece of bark gives no hint to the giant it once protected. Ah, but the memories still live on.

This then is how memories are made. An event. An unusual location. People you love. Repeat. Repeat.
Posted by Bev Sullivan at 12:59 PM