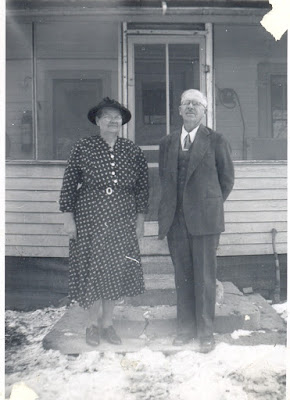 For many years, John and Eva Schroeder had wished they could visit their children, Emma and Loyd, and their families, who were missionaries in Ecuador. In 1960, the long-wished-for trip became reality. John and Eva were going to Ecuador! They wanted to experience everything in this Latino country --and they did!

They toured banana and sugar cane plantations, took hair-raising drives through the Andes Mountains and ate exotic meals in the homes of the people of Ecuador. They attended churches made of bamboo where they could not understand the language, but enjoyed the loud singing and friendly people.


The markets were piled high with juicy oranges, bananas and pineapples, and all kinds of vegetables. In the busy cities there was always something interesting going on. Sometimes John and Eva would take walks through the streets, observing everything. Their missionary children exchanged smiles as they watched their elderly parents who still held hands when they walked.

After spending several months in Ecuador, it was time to go home. They flew back to Florida, where they had left their car and started the long drive home. It was not a pleasant trip. John was suffering from back pain that made driving extremely difficult. After they got home, John had back surgery for a slipped disk. The surgery was not successful, and afterwards he was never able to walk without crutches.

Instead of improvement, John's health continued to deteriorate. Finally, there was a more serious diagnosis --cancer. Now he was almost always in pain, but he only rarely complained. Then he would quickly say, "I should not have said that. This is the Lord's holy way." Finally, he had to go to the hospital, where he got some relief from the pain, but there was no improvement in his health. In spite of the doctors' best efforts, it was apparent that John would not recover. He was slowly slipping away. He did not want to die in a hospital, so he asked the doctors to teach Eva how to inject the pain medication, and they went home. The children (except the missionaries in Ecuador) came home, and John said, "Now I am ready to die." But it was not quite time. Several days later, as Eva was fixing his blanket, he reached up and said in German, "Tass meine hand" (take my hand). Those were his last words. A few days later his suffering was finally over--John was in Heaven. It was just 10 months since they had returned from Ecuador and John was 70 years old.

After the funeral, Eva was suddenly alone. She felt her loss keenly, especially in the evening when it still seemed somehow that John ought to be coming in from the woods. To keep herself occupied during the lonely evening hours, Eva played solitary games of Scrabble.

Ten months later, she was dealt another difficult loss. Her son, Leroy, was killed in a car accident. He was just 31 and was a college professor. He left a widow and two young sons. This loss was difficult to understand, but Eva's faith remained firm.

It was hard to know what to do about the farm. For several years she made a valiant effort to maintain it, but it was a struggle. Eva didn't drive (something she very much regretted not learning) and she had periodic bouts with arthritis in her knees. In 1964, Eva was 70 years old and with John gone, she didn't anticipate many years remaining. When someone asked to rent the farm with the possibility of buying it later, she had to say "yes."

She certainly could not have imagined that she had many more years remaining. More than thirty.


Those hands that had worked so hard for so many years could not remain idle now. She always had a project going. She braided rugs, sewed and did some handwork. She wrote the story of her life which is the basis for this narrative. Perhaps her greatest love was piecing quilts. She made around a hundred of them, some going to family members and others donated to the Mennonite Central Committee for relief efforts. Whenever there was "women's work" at the farm, she was ready to help whether it was preparing corn for freezing or apples for pie. Her Bible was well-worn from frequent use. No doubt her most cherished contributions were her prayers for her family. To hear her pray with her slightly German accent using the old "thees" and "thous" was beautifully poetic.


She was often puzzled at her long life. Why did she just keep going year after year?  Why didn't God want her in heaven yet? One time she said, "It's not as if my children need me any more." Her children were in their seventies and were grandparents themselves. But she continued to enjoy remarkably good health. She was hospitalized for the first time in her life when she was 95 and was diagnosed with congestive heart failure. Later, she needed a pacemaker. At age 99, she fell in her mobile home and broke a rib. Unable to get up without help, she moved to the Buhler Sunshine Home.


Eva celebrated her 100th birthday on April 20, 1994. Her family gathered on Easter weekend to celebrate. She was a great-great grandmother. Her family was scattered from Alaska to Houston and the missionary zeal was still running strong with grandchildren ministering in Germany and Brazil. Still, a large group attended the celebration in Buhler.


It happened that all four of her daughters were there during her final days in May 1996. She was in her recliner at the Sunshine Home. When staff wanted to move her back to bed, she, who had always been so compliant, refused. The daughters circled around her and waited. They found hymn books and sang many of they old familiar hymns. Every hymn has a verse about heaven, it seems. She passed away peacefully during the early morning hours of May 10, 1996. She was 102 years old. She was a treasure.


Her children arise up, and call her blessed; her husband also, and he praiseth her. Many daughters have done virtuously, but thou excellest them all. Favour is deceitful, and beauty is vain: but a woman that feareth the LORD, she shall be praised. Give her of the fruit of her hands; and let her own works praise her in the gates. Proverbs 31:28-31

Want to read more about Eva?

(Click on the titles.)
Part 1: The Early Years
Part 2: Homesteading in Montana
Part 3: The Great Depression
Part 4: The Minnesota Years