Come Back, Martha!: A Tale of Our Guinea Fowl 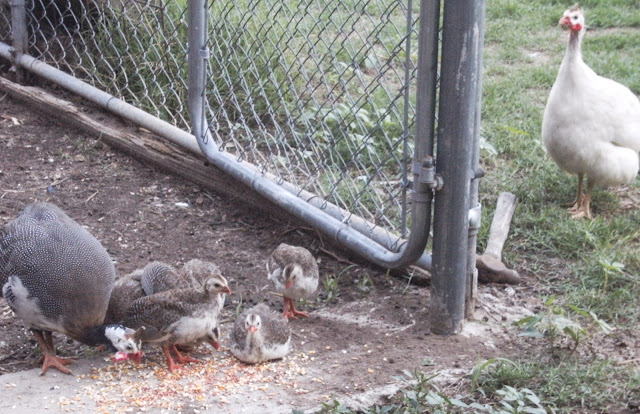 When we last left Hank, Jr. and Edna they had raised six keets (baby guineas) nearly to adulthood. You remember Hank, Jr. and Edna don't you? They were our bug-eating pair of guineas who overcame great difficulty to raise a little family in our suburban acreage.
(In case you don't remember or want to learn about them, here are the links: #1, #2, #3 and probably most important background for this story, #4). I'd kind of like to leave the story right there. It was rather sweet how the little family came together and we loved seeing them wander through our yard, always on the outlook for any kind of insect. But guineas grow up and there always seems to be some drama where our guineas are concerned. And not all stories have a happy ending.
As the young guineas grew to adulthood, we realized that we really had more guineas than we needed. We half-heartedly asked around to see if anyone wanted some, but got no response. We weren't sure how we would catch and transport them anyway. Since they had been raised by their parents rather than us, the offspring were considerably wilder than the original Hank and Edna. They roosted each evening in the pine tree above the chicken pen, stopped by for some grain once a day, but other than that they were on their own. They were noisy. When we had two adult guineas we noticed that they communicated with gentle clucks and cheeps. Occasionally, they would be startled or alarmed and a raucous cackling would ensue. With additional guineas the raucous cackling increased exponentially. Apparently there was always something startling or alarming. Loud cries could often be heard throughout the neighborhood. And now the cries were heard from further away. With so many appetites to fulfill, it was only natural that their territory would increase. 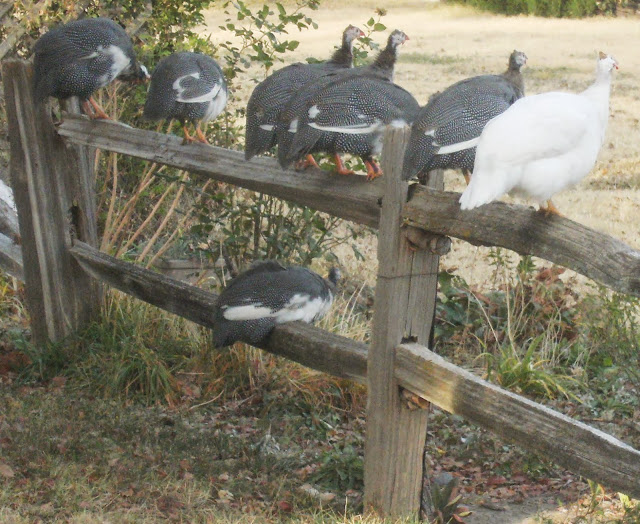 We were a bit surprised that Hank, Jr. and Edna had been able to protect all six offspring to adulthood, but now we noticed one of the younger guineas was missing. We weren't sure if it was the result of a predator or if perhaps a neighbor had gotten out their gun. We wouldn't have blamed them. They were obnoxiously loud. Then a second one seemed to be gone as well. This time Mike saw a few feathers and thought it must be a predator. One Sunday morning there was a huge guinea racket out by the chicken pen. It was even louder than usual. Something was wrong. When I arrived, I frightened off the predator. There stood the remaining guineas oblivious to any danger circled around their mortally wounded sister. It certainly sounded like they were wailing.

After that, they never roosted in the pine tree over the chicken pen again. Instead, they marched through several neighbors' yards and found a new place in a shelterbelt about a block away. They seemed to have forgotten where they belonged. We could hear them each evening as they settled down for night. We wanted them to stay home, at least for night, so one day when they stopped by for grain, Mike chased them into the chicken pen. They were not amused. It wasn't easy because the chicken pen is almost completely enclosed including the top, but several guineas escaped. With some inside and some outside the pen, they paced the fence and shrieked. We released the remaining guineas. They stomped off in a huff and we didn't see them at all for several days.

Now we had five guineas. While before they had always traveled together sweeping through the yard looking for insects, now we often had two groups. Apparently, two of our young ones had "coupled up." You are shocked, I know. "But," you say, "aren't they . . .  brother and sister?" Yes, they are. However I want to point out two things. One is that these are birds, not people and the second thing is that for all they knew, they were the only group of guineas on earth. Hank, Jr., Edna and the spinster sister who I named Martha remained together. The couple I called Jack and Jill.

The noise level went down somewhat. Still I noticed one day that Edna stood at the edge of our property while the rest of the guineas ventured into the empty field across the dirt road by our house and hollered. "Get back over here," she seemed to be screaming, "Don't you know there could be coyotes and wild things over there!" Or maybe not. Sometimes I saw her returning from the empty field, too. Far more dangerous than the empty field was the busy blacktop in front of our house. The guineas were oblivious to any danger and for some crazy reason seemed to particularly enjoy the ditches on both sides of the road. If I saw them, I tried to chase them back, but guineas do not herd well nor do they listen to warnings or instruction. They were taunting death and I knew they couldn't win.

So I was sad but not surprised one day when I saw Mike carrying the body of a guinea through the yard. It was Edna. He went back and looked again. Hank, Jr. had also been hit. He buried them in the garden. So now we had just three guineas. Or was it two? Maybe just one?

In the weeks since their parents' deaths we see guineas only occasionally. At first we were quite sure that we saw the couple sometimes and then Martha by herself at other times. One day there were two guineas in the yard and Mike said, "Listen, that's two females!" (Females have a two syllable call while males have a one syllable call.) Shortly thereafter only one guinea showed up for grain. Recently I asked Mike, "Have you seen any guineas lately?" He hadn't. "Maybe she's sitting on a nest," he said. Maybe. Just a few days ago I did see a guinea not far from the barn. When she saw me she turned and walked back into the neighbor's underbrush. I haven't seen her again.

Our neighborhood is strangely silent. I miss guineas. Without guineas patrolling my garden I won't be gloating about a grasshopper free flower garden or squash without bugs. Even if they didn't eat insects I would still enjoy having a couple guineas roaming through our yard.

Come back, Martha! She may.