Pick a Peck of Peppers!

Ah, the scents of fall. Wafting from the kitchen is the spicy scent of cinnamon and apples, or perhaps a Sweet Potato cake. Outside the air is crisp and there is the musty scent of fallen leaves with a touch of smoke in the air from a bonfire or fireplace. And yes, there is another scent as well. It's the distinct and pungent smell of roasting peppers. 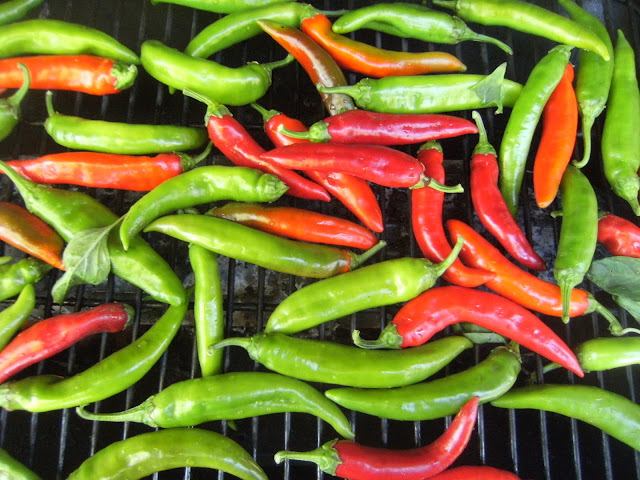 Roasting peppers has become a part of my autumn ritual. As the garden winds down, peppers continue to thrive and add fruit to the plant. Overshadowing the season is the knowledge that it will not last long. Frost is coming and then the plants will be done. And so I'm picking peppers! Pecks of peppers.

Roasted peppers are a great addition to many recipes. If you have peppers, roast them and try this simple, but outstanding recipe for a great dip. Feel free to use any pepper. My favorite is the Annaheim which has a kick but is not overwhelmingly hot. Bell peppers would be milder and chili or jalapeno would be hotter.

Please don't be afraid of roasting peppers. It's not difficult and while it involves a little time, it goes relatively fast. I'll share my directions for roasting peppers after the recipe. 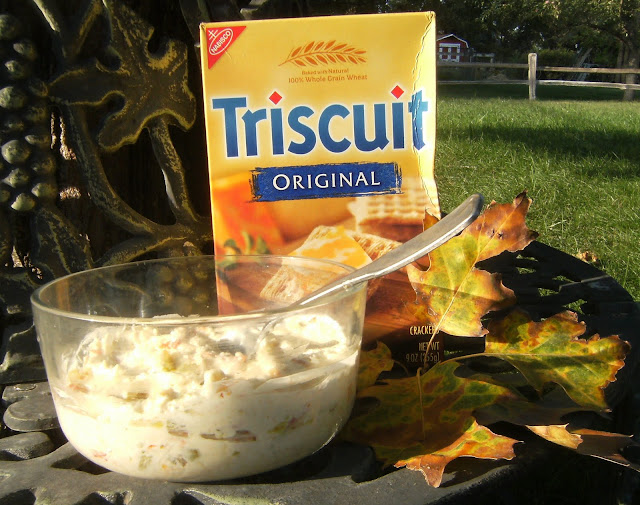 Here are the four simple ingredients needed to make the dip:

Mix together. Serve warm or at room temperature with crackers. This is a recipe where measuring is not of the upmost importance. A little more or less of any of these ingredients will still make a very good dip.

How to roast peppers: 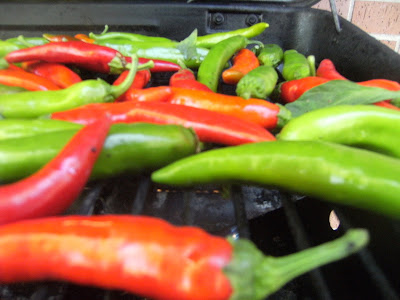 1.--Fire up the grill. A gas grill works great. No grill? This can also be done in your oven. 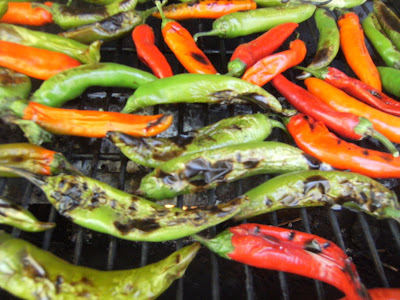 2.---Place washed peppers on the grill. As peppers char on one side, turn over to the other side. Often there is a popping sound as the pepper air inside the pepper heats up. Turn when they begin to char. Please note that there is a difference between charring and burning to a crisp! That's what happened to my peppers when I tried to fix supper while roasting peppers. Don't get too far away when your roasting peppers! I usually just turn them once. 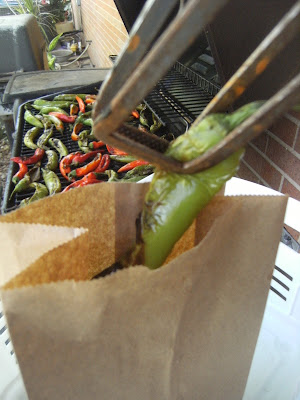 3.--When the peppers are cooked and have some charring on both sides, remove from the grill and place in a paper sack. Fill the sack about half full and roll the top down. This allows the peppers to steam and cool. 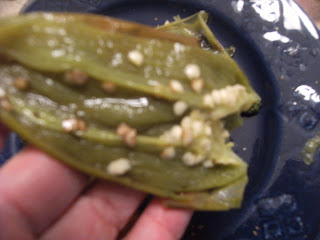 4.--When peppers are cool, remove from bag, slit open and remove seeds and membrane. Turn pepper over and remove skin. It should just slip off. If your peppers are very hot, you may wish to wear plastic gloves to prevent your hands from feeling very warm. 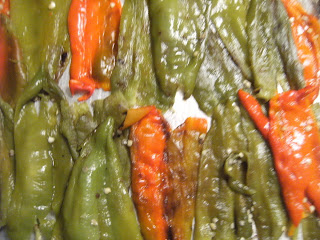 5.--Roasted peppers can be used immediately or frozen for later use. I usually freeze the peppers in a single layer on a tray and then break up and bag when frozen. I don't think it is possible to have too many roasted peppers on hand. 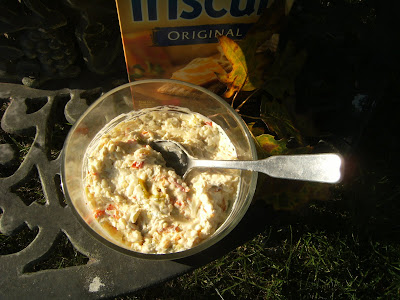 Other ideas for roasted peppers:

Posted by Bev Sullivan at 10:41 AM No comments:

A Kansas Country Garden: The Month of September


Autumn Joy Sedum does bring joy. It's autumn floral display is the peak of its many  good attributes, but  from the moment the little round balls peek from the ground in early spring, through the heat of the summer and on into winter when its dried flower stalks add interest in the garden, it's always a great plant. Right now its the bees, butterflies and insects who may be singing its praises the loudest. They love this plant, too. Maybe more than I do.


There is a lot to love about fall. The cooler weather revives some of the plants. Others begin their bloom. As the leaves begin to change color, it's a poignant reminder of the temporary nature of the garden. Cherish these days of color and warmth. They will not last forever.