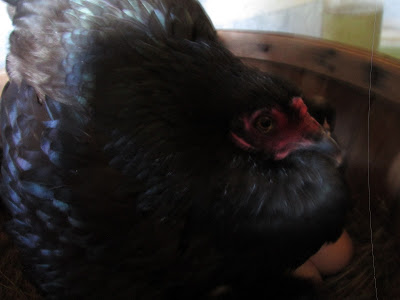 Our story begins with a black hen. There is also a golden hen and a few more tiny little characters, but we'll learn about them later.

The black hen was of a persuasion that believed in sitting on a clutch of eggs for an extended period of time with the firm hope that this would result in baby chicks hatching.

One day she flew out of the chicken pen, entered the barn and found a basket that was storing nesting materials and laid an egg. She did the same thing for several days. Then she settled in to sit and wait.

There was only one problem with her plan. There was no rooster in the chicken pen and so the eggs were not fertilized. They would never hatch. This might have been a very sad story if not for some human intervention. One day when she was taking a quick break to get a drink and a little food, the human (aka The Chicken Policeman) replaced her eggs with fertilized eggs. She never knew. 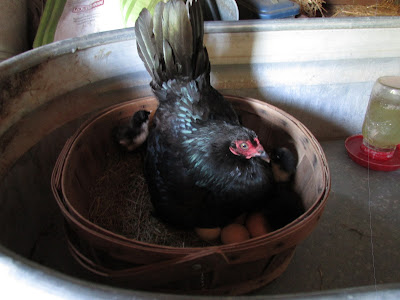 She just continued to sit. For three  long weeks she just sat there, warming the eggs with her body heat and exploding into a huffy billow of feathers should anyone come too close. 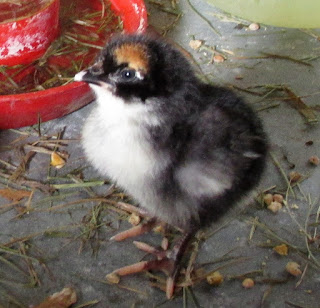 And then it happened! An egg began to crack and soon a chick emerged, gave a shake or two and ball of fluff was ready to engage the world. Over the next few hours five chicks hatched. The black hen continued sitting on the remaining eggs for another day before it became clear that there were no more coming. 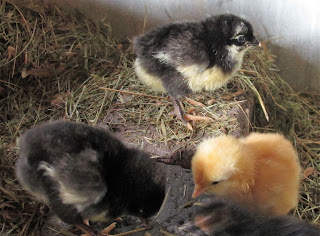 As story continues the mama and chicks have settled in to their new home in an empty tank perched high above predators. Who knows what adventures are in store for the black hen and her chicks? They may include scratching for grain or eating bugs. 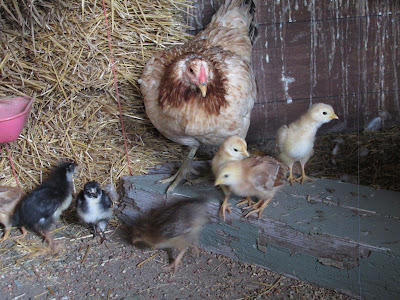 Meanwhile, the story of the golden hen is almost exactly like that of the black hen, except hers takes place a week or so before, her nest was tucked in above the feed trough and she hatched nine chicks! 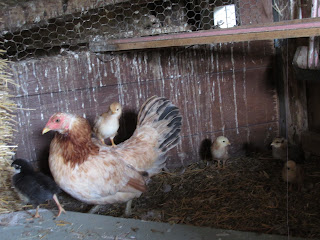 These little chicks are growing and active. Some of their fluff is already being replaced with real feathers and they have begun to learn to fly. First stop -- mom's back. (see photo on right).

The chicks are not biological offspring of their mamas. It doesn't matter. The hens are dedicated to caring for their chicks. If things don't look quite right, she calls them to her and nestles them under her wings. There seems to be a variety of calls and communication from the mothers followed by a chorus of peeps from the chicks. The little chicks are active and willful and don't always seem to follow the directions their mothers are trying to convey. In just a few months, the little chicks will be full grown. Until then, a salute to two persistent hens who won the waiting game!